U14 Half Term Training Trip to Spain

As the February half term approaches, the Surrey U14 squad boys excitement builds with the highly anticipated winter training camp in Spain. Its great to have the support of the County to be able to arrange such a trip and give the boys some coaching and competitive golf in the better climate.

We met at Gatwick airport at 4.30am, after check in and saying goodbye to parents, we were off. We were staying at Mar Menor golf resort in Murcia which is 30 minute transfer from the airport.

After checking into our villa and unpacking, well at least the golf bags, we met for lunch at the club house. After a chat about format for the 4 days it was straight to the 1st tee at Mar Menor. To keep a competitive edge, the boys play for their villas which were:

The format for each day was triple match play, which allows one of our coaches Ben Clayton and Sam Truman the chance to play 9 holes with each group. The groups for the first round were in handicap order so we expected some close results. In fact Villa 4 took a good lead after round 1 with a clean sweep in all matches and some bonus points for winning matches 4up or more!

A 10 minute walk back to our apartments for a very quick shower and change before heading out for dinner. The boys chatted round the table about the results of the day followed by darts, pool and some man hunt. The team managers gathered their villas to discuss tactics of the following days playing order. The matches were subsequently announced with some interesting matches.

Day 2 began bright and early after meeting at 8am for a buffet breakfast. Our mini buses collected us at 8.30am to go to El Valle golf club for the day. Along with coaching staff Ben Clayton and Sam Truman, this year we were able to have a mindset coach, Rhys Mooney from iPursuit Performance Psychology on the trip with us. On arrival at El Valle, he did a presentation to the boys around what ‘psychology’ is, and how working on this will benefit them. His main focus was on routines and processes. Throughout the 3 days Rhys observed coaching sessions and walked with groups whilst playing their afternoon rounds. There was lots of interaction on 1-2-1 basis with the boys and lots of questions being asked.

The morning coaching sessions at El Valle were focused on putting including green reading and pace control with Sam Truman and bunker work with Ben Clayton. We also had some trackman tests setup on the driving range.

After lunch in the clubhouse the boys headed out to the 1st tee. El Valle has a desert feel to it as holes wind through the rocks with the back 9 having lakes and streams. Very picturesque course with some challenging holes.

Some great golf played with again some big wins but on day 2 these went to villa 1. Even with one man down due to injury, villa 1 had a full house of victories. They were to be the overnight leaders with villa 4 in a close 2nd.

Time to head back to our base at Mar Menor. All golf bags were dropped to hotel and straight out for dinner.

Day 3 and the final golf club for the trip was Condado de Alhama. Alhama Signature is a spectacular course, playing 6600yards from the yellows, containing 5 lakes, original circular tee boxes, wide fairways and fast greens. Definitely the most challenging course of the trip but one the boys thoroughly enjoyed.

The morning started with coaching at the superb practice facilities. With Sam Truman the boys worked on putting including an introduction to aim point, whilst Ben Clayton worked with boys on the chipping area. Rhys Mooney worked on range with some competitive pitching challenges and again some driving accuracy and distance testing with trackman.

At lunch the final groups were revealed for the afternoon matches. Groups had been arranged so all boys played at least 9 holes with each of the coaches.

Final round saw the best of the weather of the trip and as all other days a buggy run was in order to supply boys with water and snacks. Another day of some great golf.

As the groups came off the 18th the scores for villas 1 and 4 looked very close with the overall result in the balance. Scores were double checked and after 3 days of competition it was a tie! Fortunately the villa managers were Ben Clayton and Sam Truman, so we quickly decided there should be a one hole play off with the two pros representing their villas. If the scores were tied on the playoff hole, it would be decided by nearest the pin in 3 shots. Both pros made their par but Sam Truman just got inside Bens ball with his superb 3rd shot from the bunker, so villa 1 were champions for Spain 20. A fitting and enjoyable end to a thoroughly great few days in Spain.

Back to our villas for our final evening. Usual routine of heading out to restaurant to eat. Final games of pool and darts before heading back to pack before having to be ready at 8am for breakfast.

Day 4 another early start and some very weary looking faces! Time to head home. We landed back at Gatwick around lunchtime and boys all met by their parents. A thoroughly enjoyable trip and sure the boys will have some great memories of Spain 2020. 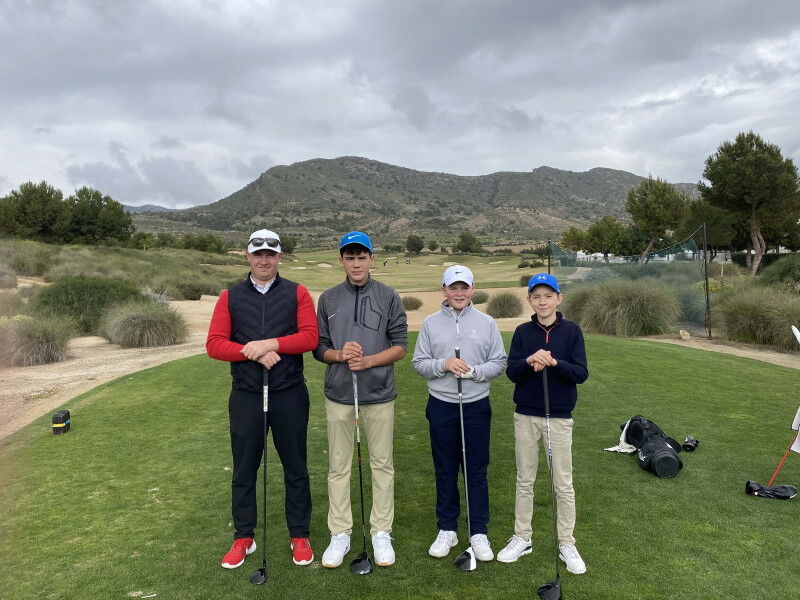 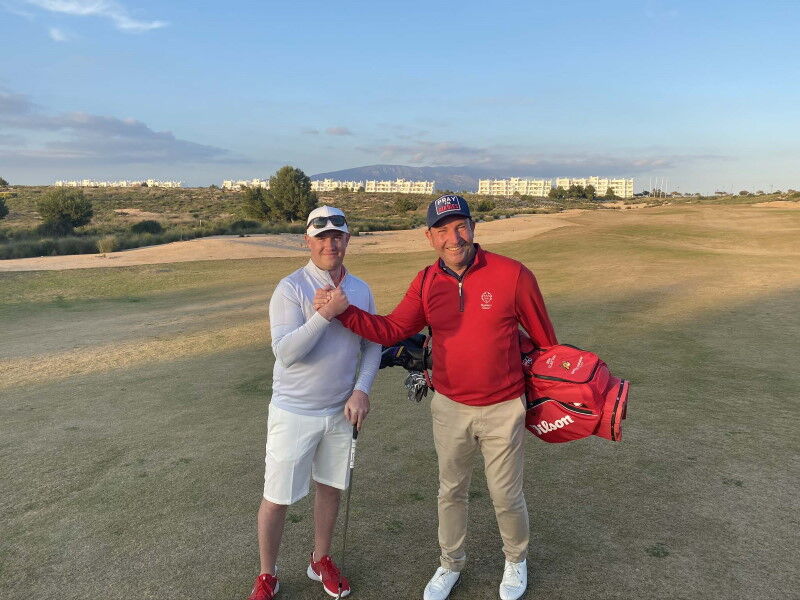 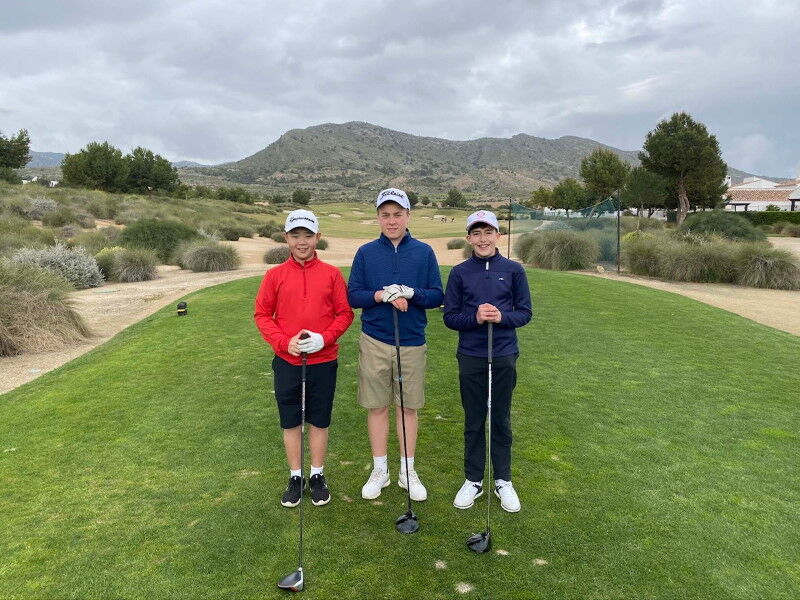 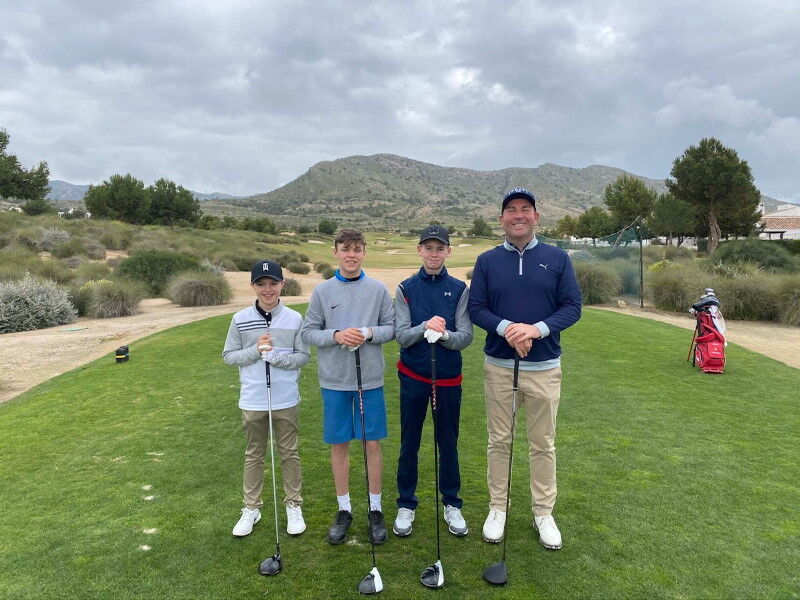